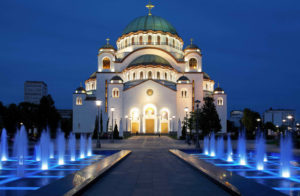 Churches in the Balkans don’t come much more monolithic than this. That is a descriptor and a fact, as the Church of St Sava is the largest in the region and one of the biggest Orthodox cathedrals on the planet. Built on the spot where the eponymous saint’s remains were supposedly burned to dust in 1594, work on the church began in the late 19th century and continues to this day. That work was understandably interrupted by World War II, before Tito and the socialists decided it would make a good place for a car park. It wasn’t until 1985 that work on what many assumed was an old castle continued. The interior is still under construction, but that adds a certain humanity to this most impressive of spiritual buildings.